Totton, once the 'largest village in England' is now a town of surprising historical secrets... apart from the toll charged at Eling Tide Mill... no surprise that England's oldest medieval toll found a way to stay alive! 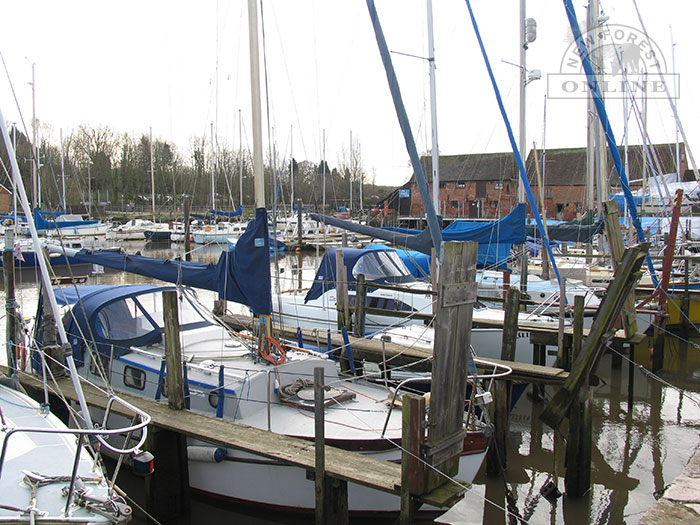 Moorings at Eling Tide Mill on the River Test, near Totton

Netley Marsh on the edge of Totton was the site of an early battle between Anglo Saxon invaders under Cerdic and Romano-Celtic peoples. The construction of Testwood Lakes revealed a treasure trove of ancient artefacts, including one of the oldest known bridges in England, believed to date to c1,500BC.

The only medieval toll left...

The only surviving medieval toll in Hampshire (started c1418) runs directly past Eling Tide Mill. The causeway replaced a succession of bridges. The mill and toll were owned by Winchester College until 1975, when they were given to the local Council. The toll charge has increased from sixpence in 1967 to 30 pence in 1988 to over £1 today! Funny how some traditions are wholeheartedly embraced...

Until 1974 when Totton was made a town, it was known as the 'largest village in England'. Until the 1967 forest perambulation fencing, New Forest ponies were free to roam its streets.

Totton & Eling is a town of about 28,000 population in the New Forest District and County of Hampshire.

Situated on the River Test, the area has a long history of shipbuilding but also maintains strong links with the Forest. Until the 1950s New Forest ponies used to roam freely around the town.

In 1974 Eling Parish Council became Totton & Eling Town Council due to the increase in size of Totton town.

Things to Do and See in Totton

A settlement has been here for many centuries, and some Palaeolithic implements have been discovered and the nearby Tatchbury Mount Iron Age fort suggests occupation of the area from pre Roman times.

This would have been an ideal spot for setting up a community as it has a natural outlet to the sea, with its salt-producing marshes. The area was divided into manors after the arrival of the Normans and these eventually became hamlets that eventually joined together to make Totton which was once regarded as the 'largest village in England' and is now combined with Eling. Totton got its name from Totinctone in 985 (named Totyngton in 1174 - 1199). Old English Tot(r)ingtun ' farm of Tot(t)a'. A tide mill has existed here for centuries, and is mentioned in the Domesday Book. It was built for milling the local flour and is still producing today; one of a few such mills in Europe and a favourite tourist attraction.

Next to the mill can be seen wharfs where once ship building thrived but is now owned by timber merchants and light industry, while Eling Creek is a polular place for the mooring of private boats. The Anchor Inn, which stands on the wharf, is a popular stop off for those sailing in Southampton Water.

The church of St Mary with its 15th century tower is set on a hill facing the mill and was built during Saxon times and its registers date back to 1537. The church is a goldmine of history and is well visited by historians, and it is famed for its picture of 'The Last Supper' which hangs above the altar. This was painted by the Venetian, Marziale, who was an artist who may have known Michaelangelo and perhaps copied his famous painting which hangs in the Sistine Chapel in Rome.

The church has an arch that was built long before William the Conqueror landed and nearby there is a splendid helmet that has a crest of a castle with red flames pouring from its battlements. The chancel arch is from the 13th century and a delightful 17th century candelabra with a dove carrying an olive branch in its mouth can be found here. It is said that the vicar who noticed that it was around 300 years old saved it from a passing tinker's melting pot.

The only surviving medieval toll in Hampshire has to be paid by owners of vehicles that cross the Bartley Water at Eling tide-mill (exceptions are made for visitors to the cemetery or church). The causeway replaced a succession of bridges; the toll has been paid since at least 1418, the date of the earliest known lease. The mill and toll were owned by Winchester College until 1975, when they were given to the local Council. The toll charge in 1418 is not known but in 1800 it was six pence for a four-wheeled carriage and in 1967 it was still only six pence. In 1988 it was 30 pence, an increase of over twelvefold in 21 years! Now in 2013 it is over a pound! 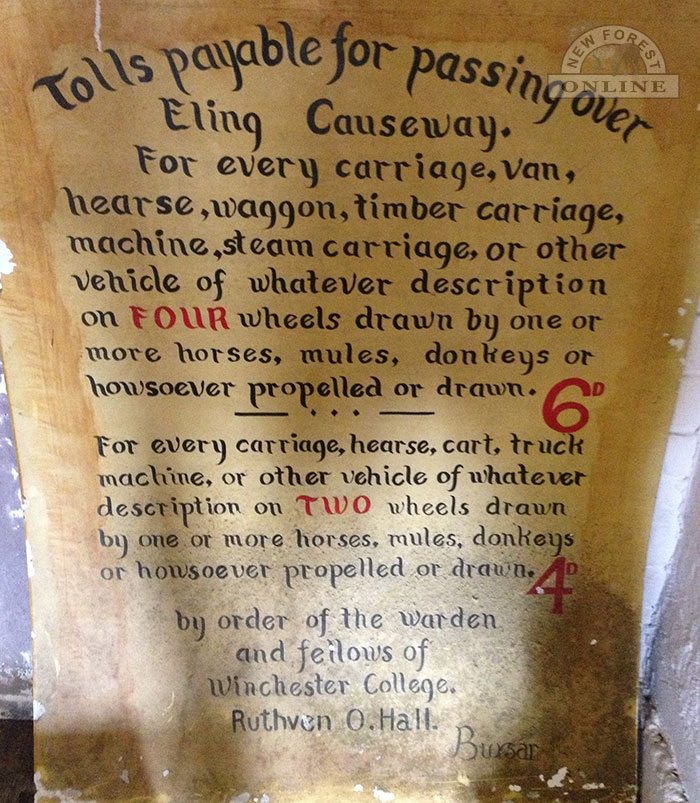